Made In Vermont (4:30pm screening)

Made In Vermont (4:30pm screening) 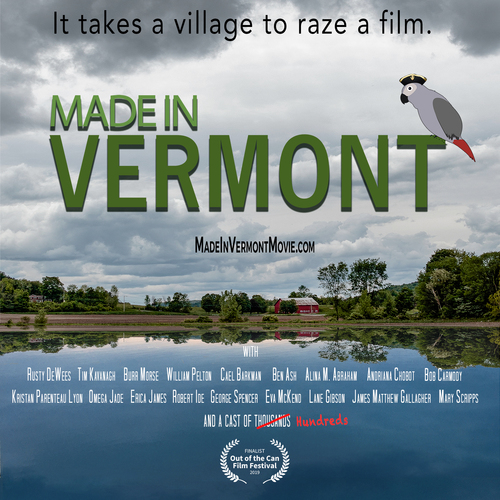 Across Roads Center for the Arts andWaterbury Winterfest presents: the independent comedy film

Made in Vermontis headed to the Grange Hall Cultural Center on Saturday January 25 with showings at 4:30 & 7:00pm. Tickets by donation available at the door! Make sure to catch it before it travels the film festival circuits.

Made in Vermontis an independent feature-length comedy about good intentions, unintended consequences, and a parrot. A group of down-on-their-luck creative types concocts a scheme to win the coveted Golden Gizzard award, bringing together a whole host of personalities and dreams as they race to put together a movie on a tight budget and even tighter deadline.

The film features performances from beloved actors and business professionals including Rusty DeWees, Tim Kavanagh, Eva McKend, Scott Fleishman, Burr Morse and many more. The film was shot on location in Vermont using talent from all over the state.

Production of the film was a celebration of community. Lonnie Poland, the film’s producer said, “From the beginning the production team aimed to keep the talent, crew, props, and locations all Vermont-based. Everyone volunteered their time, and many businesses donated their services and locations for scenes.”

Made in Vermont takes viewers on a tour de force across the beautiful landscape of the Green Mountain state, from Waterbury to Burlington, Georgia, Chelsea, Montpelier, Jeffersonville, Milton, Braintree, and beyond.

Made in Vermont, was written by Roger Strauss & Jim Hogue, directed by J. Louis Reid & Noni Stuart, and produced by Lonnie Poland.