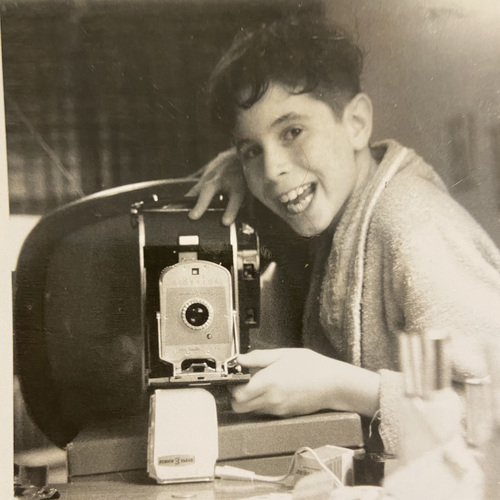 MONKEY MAN: A One-Woman Show About Family, Schizophrenia And Being on the Road

written and performed by Dana Block

Advance ticket sales are strongly encouraged. A very limited number of tickets will be available for purchase at the door. Please arrive by 7:20 p.m. — No late seating will be permitted. Unclaimed tickets may be sold.

Produced by Off Center for the Dramatic Arts & the Willowell Foundation. Dana Block and Off Center for the Dramatic Arts invite the public to “Monkey Man,” a one-woman show about her brother Marc who documented his descent into mental illness while hitchhiking thousands of miles cross country. Set in Dana's family home of rural St. Joseph, Missouri, “Monkey Man” chronicles the devastating effect his illness had on her middle class, Jewish family. Unexpectedly funny, eccentric, and deeply moving, “Monkey Man” illuminates the vulnerability of a family and a sister as they watch a dear son and brother fall over the edge. The title “Monkey Man” comes from “a little stuffed monkey Marc carried around until the damned thing disintegrated,” says playwright and performer, Dana Block. “Growing up, Marc was a gut-splittin’, hell-raisin’ comedian of a kid. But when he became a teenager and schizophrenia set in, he went into a dark orbit, taking on the persona of “Highway Man”, his mission, in his own words, to “tell my stories to drivers, keep ‘em awake at night.” “Marc tried to reason his way out,” Dana says, “finding tunnels, underpasses and crosscuts, but nothing ever led him back home.” “Dana Block fill[s] the stage with movement, voice, sound-effects, and music... she tells the story with dance, sometimes with poetry, of her early life with her bohemian, theatrical, Jewish family in Missouri... Monologues explode like a bomb going off in slow motion. Ms. Block’s performance was brilliant,” — WILLIAM J. CATALDI, Hi Drama Cable, NYC 11/5/19.“Through anecdotes, and a stellar air guitar performance… Dana introduces us to Marc’s quick wit and unfathomable creativity, even as his brain begins to pull him further away from reality … Block’s vivid and poetic language sings. It is a privilege to be let into her world… its gravity is gripping.” —LEIA SQUILLACE, All About Solo, 11/7/19

“Monkey Man,” features the fierce and brilliant writing that Marc set down in notebooks as he became progressively more paranoid and delusional. It offers a rare insight into the mind of mental illness. “The subject is still stigmatized and full of shame,” Block says. “Often, people come to me after the show and quietly confide they lost a family member to mental illness, suicide, life on the street. It touches many people’s dark, hidden-away griefs.

DANA BLOCK is a Vermont-based performer, actor and writer. She most recently performed “Monkey Man” Off-Broadway at The United Solo Festival on Theater Row, 2019. Previous NYC credits include her original one-woman show, “Queen Kong” at Theater Row, 2018. She has appeared extensively on regional stages including Chicago’s NorthLight Theater, Kentucky Shakespeare, Actor’s Shakespeare Project (Boston), Vermont Stage and Lost Nation Theater. She acted in Richard Foreman’s Indie Film, “Once Every Day,” (winner New York Times Critics Pick 2013). and has worked with Hanya Holm, Tina Packer and Michael Kahn. She was a member of the San Francisco based “LADIES AGAINST WOMEN,” one of the nation’s first feminist improv groups, appearing with Paul Krassner and opening for The Grateful Dead. She has an MFA in Classical Acting from George Washington University and has written and performed four one-woman shows and a full-length play and is on the faculty of the New England Young Writer’s Conference at Breadloaf.

Producers: The Willowell Foundation is a nonprofit Foundation devoted to the consilience of Arts education and the environment supporting Vermont-based and international Artist as well as Innovative programming for young people. It is the home of the internationally-renowned Walden Project.

Off Center for Dramatic Arts is a collective of theater artists whose mission is to support a performing space in the Burlington Region which offers low-cost rates to theater artists and performers and reasonable ticket prices for audiences.